There was something odd about the XJR but I didn’t notice it for four days and 400 miles. I didn’t notice it while I was grimly hanging on at 90mph down the bypass on my way into work, with the veins on my arms bulging like fat, purple worms and my neck bulging like a fat, purple Nigel Mansell. I didn’t suss it going ape on some back roads, bottoming the XJR’s soft, Цhlins suspension over every bump and lump. A desperate thrash across the fens to Snet to watch the six-hour race left me none the wiser. Even a 200-mile neck-buster down the Mil failed to reveal this particular flaw in the XJR’s character. It took Bruntingthorpe’s two-mile runway to show up the problem: this bike is a Japanese-spec grey import, restricted to a measly 112mph and brought into the UK by retro-freak Nick Culton of West Coast Motorcycles in Southport (0704 546378). The full monty XJR isn’t imported into the UK yet, but it’ll

be on Yamaha’s stand at the NEC and in showrooms by Spring ’95. But this isn’t a test of a bike handicapped all through its rev range by a power limit. Up to 112mph the XJR does everything the UK-spec bike will, and above that is irrelevant for retros. We all know unfaired bikes are crap on the motorway. What matters is how they grunt and how they look.

The XJR grunts good. The massive, aircooled motor is nicked from Mr Grunty himself, the FJ1200. Yamaha have retuned the engine for more poke low down, losing 15bhp at the top end and pushing peak torque down from 6,000rpm to 4,000. As a result, it’s best to forget the top half of the tacho — anything over 6,000rpm is missing the point. And the fun. Unlike Honda’s flat, lifeless CBR-engined retro, the XJR is a fit ‘un and goes like stink if your idea of performance is how rapidly a bike short-shifts into top gear. Repeat after me: braaap, brap, brap, brap, brap. There. You’re now doing 70mph at 4,500rpm in top and still accelerating hard. That’s what 70ft-lb of torque, super-low gearing, instant throttle response and a fabulously slick box do for you. Long, sustained trips round the tacho to the 9,500rpm redline are a no-no: they’re unrewarding, knackering and no better at propelling the XJR’s considerable mass forward than shifting between four and 6,000.

Low down zip is enhanced no end by a sweet drivetrain. Every part of the line feels engineered to give minimum resistance to the path from wrist to wheel. Light throttle action, spot-on carburation, an uncannily smooth, almost frictionless, engine, low, close gearing and finally a virgin chain and cush drive make it happen. Basically, you open the throttle and the engine rips loose instantaneously. T’riffic. No wind protection and the XJR’s explosive punch out of first and second gear corners make town and twisty country lanes the perfect hunting ground for stalking unsuspecting race reps and blowing them away.

And that’s the game the steering likes playing as well. You wouldn’t expect a word like ‘agile’ to come into this test, but it does. Agile. See? The XJR has a sharper head angle, shorter wheelbase and weighs less than any other retro. Point the Yam at a corner and, nine times out of ten, it goes where you want with a reasonable degree of accuracy. Then, on the tenth time, it’ll go where it wants and you’ll crash — it turns rapidly enough, but with no fairing and the rider acting like a parachute at speeds over 70mph it steers with all the finesse of a bent shopping trolley.

Hustling the Yamaha round low and medium-speed corners would be a gas if it wasn’t for the sloppy suspension and crappy Ground Clearance (one photo session at mild lean angles = new footrests, centrestand and exhaust. We haven’t got the bill yet but it’s going to hurt). Yamaha own Цhlins (the company) and fitting their gear is a good marketing move because it’s ultra-cred. It looks trick too.

Sadly, looking trick is the limit of this particular pair of shocks’ usefulness. As devices for controlling the attitude of a speeding XJS over bumps they ain’t so hot. They’re softly sprung (which isn’t a bad thing in itself. In fact the XJR is nice and comfy over smooth stuff), but as soon as bumps come into it, the damping takes an early bath. Hit some mid-corner, pegs down, with a passenger on the back, and things get more and more wallowy until the rear tyre gives up and starts to chatter sideways, off the line you want and into the path of. eeeek. Best not think about it. There’s no adjustment for damping, and there should be.

“/ don’t care whose name is on the shocks, if they’ve got naff all damping and you can’t adjust them, they’re crap. They might as well be Yamaha’s own for all the use they are,” said Kenny P, after watching the XJR’s rear end leaping about during the photo session. Just as well, ‘coz rumour has it the shocks win be Yamaha’s own when the XJR gets to Britain.

The Yam’s low speed balance is excellent. A low c of g, quick, light steering and generous turning circle make the Yam a doddle to twist and turn through traffic at walking pace, while its well-hidden weight and low seat height make it the most manageable retro yet. It’s also one of the most comfortable. The wide, plush seat means rectal comfort for everyone including pillions, the pegs are set back so the rider leans forward to the narrow bars, balancing weight against wind blast.

Braking is looked after by a pair of Exup-sized discs and calipers: cue the usual adjectives about one-fingered stopping power, etc. Top kit. The unadjustable forks aren’t so good. They’re the reverse of the shocks: enough damping to keep things in control, but not enough spring to stop bottoming out with a wrist-pounding clunk under banzai braking. Other bits of the XJR include a headlight with amazing full and weedy dipped beams, a fuel tank which goes for 140 miles before reserve (with a tiny tap buried deep under the tank), a pair of sticky Dunlop D202s, and mirrors which show 50% elbows.

First impressions last: looks kill and the XJR is a convicted mass-murderer. Styling may be a matter of opinion, but the Yamaha increased the inner thigh temperature of everyone it passed. Comments went from ‘handsome’ to ‘reet f. tasty’, but it was left to my own, personal style guru Melanie to pass final judgement: “It looks better than the rest of the crap you bring home.”

Yamaha’s XJR is the best retro yet: best engine, best riding position, best steering, and second-best suspension (beaten only by the CB1000). And it looks smart. If only Yamaha can keep the price under Ј7,000.

Approach the GSX1100G with an open mind, but first sight of the dull, grey/brown paint, anonymous styling and you know you’re in for a tough time. But don’t dislike it for being ugly.

Do dislike it for its impossibly heavy steering. It’s the first thing you notice when you heave the bike off the sidestand and it puts you off immediately. The front wheel is raked out almost to custom bike dimensions, so turning the bike at standstill and walking pace needs massive countersteer on the bars. It’s like trying to steer a supertanker through treacle and in town it’s a real pain in the wrists. And the neck and back too, at anything above town speeds, thanks to wide bars and feet-forward pegs. The riding position is grim even by retro standards although the wide, firm seat is comfy for pillion and rider. The GSX’d be good with a fairing. This is the biggest problem with the Suzuki. It has a 30mph-wide operating window between 20 and 50mph where it functions like a proper motorbike. Below 20mph the steering, weight and wheelbase make it unmanageable and above 50mph the wind pressure and riding position get increasingly intolerable.

So how does this make the GSX different from the XJR, or any other retro? Because the XJR (and CB1000 and Zephyr to a lesser extent) has a lightness of touch that diguises the weight. Its steering, light throttle and clutch, short-throw gearbox and responsive engine make it feel more nimble than it is. Everything about the Suzuki is heavier: the hydraulic clutch has an annoyingly springy lever action, the gearbox has a longer reach between ratios than the Yam, the throttle is heavier, and the bike weighs lOOlbs more. Bung in restricted steering lock and top heavy weight distribution, and you’ve got plenty of toppling-over-in-the-car-park scenes to look forward to. Manoeuvrable the Suzuki is not.

There’s nothing to get upset about with the engine. It’s Suzuki’s familiar oil and aircooled GSX-R motor, retuned, like every other retro, for low and mid-range torque. The harsh, buzzy feel of all Suzuki’s in-line fours is still there at the top end, but the GSX carburates cleanly at low revs like no other motor. It’ll take full throttle from just under l,000rpm in top gear, pulling harder and harder through the rev range until your arms get torn out of their sockets at around 130mph. Full chat is academic, but for the record it’s around 140mph at the 10,500rpm redline.

On the open road the Suzuki never shakes off the 112mph-restricted XJR thanks to the GSX’s inferior riding position which makes 1 lOmph plus impossible on anything other than a straight road. Top gear roll-ons sort the two motors out: up to 40mph the XJR pisses it, but from there the GSX pulls steadily away from the Yam.

The GSX suspension does its best in a fight with the flab which it’s always going to lose. The rear shock is high spec — fully adjustable bump and rebound damping — and keeps the rear wheel in order at speeds and angles you wouldn’t expect it to given the GSX’s sheer physical enormity. The range of adjustment is enough to go from soft, touring-type comfort to teeth-chatteringly solid, and a compromise for everyday conditions is easy to find. Position three of four on rebound and bump just over halfway through its stepless range was good enough for road use, including a hectic photo session over some particularly nasty mid-corner bumps. Even with pegs, centrestand and exhaust dragging like crazy, the GSX never got pushed off line and its tyres (mediocre Metzelers, built for longevity) stayed in contact with the tarmac.

The forks aren’t so clever. Seriously soft and with no adjustment, they bottom with a dramatic clunk under heavy braking. Then the front wheel locks and skips over bumps. This can be good fun in the dry, but in the wet. yuk. The brakes are unremarkable, stopping the GSX quickly and efficiently.

The other bits are all here. The tank holds 150 miles-worth, the reserve tap is huge and easy to find, the headlight is OK, the mirrors work, the clocks look like clocks and the switchgear is standard Suzuki issue. 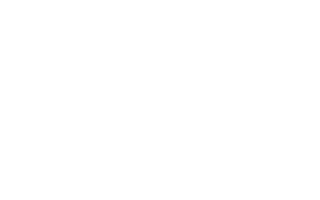 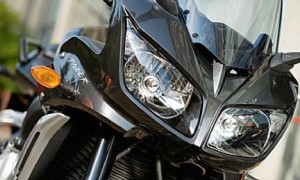 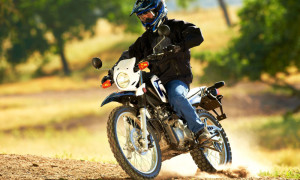 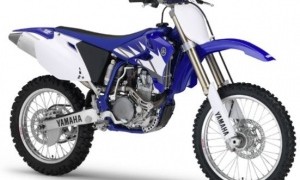